Nepal has many serves as one of the best collection of wildlife on the planet- from exotic lophopurus to the elusive Royal Bengali Tiger and from the endangers one horned Rhino to exotic snow leopard. These are only few to mention as it also has the largest collection of the birds and butterflies in the world. Even in an small area of less than 100,000sq.miles, Nepal not just have the elevation of 70 m to 8848m but a wide variety of wild floras and faunas that is incomparable with any other geographies nation of the world.
Nepal has two national parks where you can explore the wild-life getting safaris yourself deep into the heart of the forest, while the others serve as the natural habitat to thousand of animals includes snow – leopard, Garials corcodailes. Ram,rob cats endangered red panda Elks.deers, Anteplores, Kastouri monkey. Hundreds of birds intact Arun valley has the largest population of the Birds (650+) and butterflies (850+) in the entire world and butterflies.
Our government has includes following sites s the official preserved area of the country royal chitwan national park is enlisted as the world heritage site. Like
We have many National park as well.
The Royal Chtiwan National Park.
Sagarmath Nationa Park.
Langtang National Park.
They Chitwan National Park.
Royal Bardiya Nationals Park.
Shey Phoksuundo National Park.
Rara National Park. 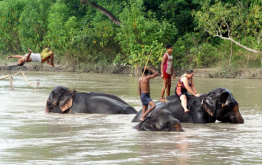 One of The subtropical forests of  Chitwan National Park in Nepal and it will offer a reliable habitat for a variety of wildlife & flora and fauna, as like Royal Bengali Tiger and from the endangers one-horned Rhino to exotic snow leopard[..]