Royal treks only have one of the amazing trekking trails in Nepal near Pokhara in the north of the Annapurna region. This is one of the short treks followed by a shrub-like path along the foothills of the valley. The Royal Trek is named after Prince Charles and his 90 person entourage who had explored this route in the early eighties. The royal treks provide the opportunities for a meaningful cultural experience with the diverse mix of peoples and cultures that inhabit this region.

The Royal Trek is a star from the attractive village from Bijaypur Gurung hamlet village. During the trek, you can enjoy spectacular views of the powerfully build hillside, rice terraces and the magnificent Annapurna  Himalayan range which is all snow covered mountain. This trip ends at the scenic begnas Lake which is 30 kilometer from Pokhara down.

The Royal trek trip is basically recommended for the beginners and who are restricted for trekking for long period.

The royal trek witnesses the true picture of uniqueness and allows us the chance to capture the traditional lifestyles of the tribes whose ancient religious practices and traditions have remained unchanged for thousands of year.

Comparing to other trekking areas in the Annapurna region, Royal trekking route is less crowded and you can get a more close view of nature, culture, and lifestyles of people who are residing in those areas.

That trek,s u can star from Kathmandu or Pokhara, It is also easy and comfortable treks around near the city for one of the old Royal treks in Nepal.

So for further more information and queries for your adventure trip to in Nepal, Please you can freely email or phone, WhatsApp, whatever easy for you. Check out the itinerary given below and we will make your itinerary according to your requirements with the best design.

We will pick up you at the international airport then drive you to our hotel inside the Kathmandu city. After the refreshment, if you want we can explore the town or places around the hotel. And in the evening we will have a traditional dinner.

After having breakfast in Kathmandu, we will travel to Pokhara from tourist bus which will take6-7 hour drive via  Prithvi Highway. We will be stopping by for lunch and have a wonderful view of nature all the way. After reaching to the Pokhara we will check in to the hotel and freshen up. After that, we will be exploring the Lakes and explore the city.

After breakfast, we will drive you towards the Bijaypur Village. Depending on the time, you can camp either before or after Kalikastan.

After breakfast, The trail follows along the forested ridge top through Thulokot to Mathi Thana, where there are a few tea shops on the way. There is a short climb, then the trek reaches Naudanda. Continuing along the ridge to a school at Lipini village, then make a steep but short climb through forests to the Gurung village of Ahaklung at 1730m and stay overnight atShaklung Village.

The  Nepal Planet treks have continued to change as the route comes of Annapurna ll, Lamjung Himal, Manaslu, and Himalchuli. From Shaklung, the trail drops steeply down the south side of the hill to a large tree, a chautara, several tea shops, and a police check-post. This is a trail junction trails which lead west to Begnas Tal and east to the Marsyangdi Khola. The Royal trek rout climbs towards Chisopani, winding around the back of the hill to the village short distance above Chisopani is a high knoll where there is a small temple. This is Chisopani Danda (danda means ridge top) and there is a camp with splendid mountain views.

From Chisopani Danda, descend along the ridge for an hour or so, then descend steeply on the stone steps, into a small valley and a stream that feeds Rupa Tal. Continue for a short distance through the rice fields,
then make a final ascent to the ridge that separates Begnas Tal and RupaTal.
On a wide path that you will share with many local people. From the ridge, descend into the Pokhara valley, joining the road at the crowded, dirty and noisy Begnas Bazaar. Take a taxi or a bus for the 16km, 30
minute drive back to Pokhara over night in Pokhara.

After Breakfast, we will drive you to Kathmandu through bus and stay in Kathmandu.

Your journey ends in Nepal and we will drop you to the airport and fly to home. 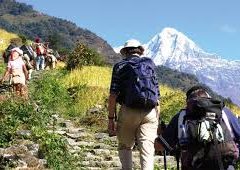 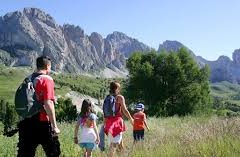 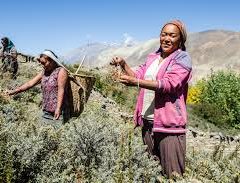 Write a review   Book this trip